Teenage Mutant Ninja Consonants
To Be or Not to Be?
An Article About Gender
Journey into Welsh
Search Posts
Links
Privacy Policy My Radio Comedy Blog Duolingo Say Something In Welsh Online Welsh Dictionary Help Hannah's Horse!
Help Hannah's Horse!

(This has nothing to do with Welsh)

Around 12 years ago I wrote and released a small PC game called "Help Hannah's Horse". It was essentially a variation on Pacman - collect the coins scattered about the maze while avoiding the ghosts and gathering the moving carrots and the powerups that appear from time to time. A few people played it and it got included in the Debian Linux repositories.

Recenently I got thinking about that game again and thought it would be nice to give it a bit more polish and change the music. The music particularly has always niggled me; not because it's bad (it's great!) but because I found it online and just used it. I never credited the composer and never checked if it was free for non-commercial use. I have no idea where I found it, so unfortunately I can't correct this now. I don't even know the name of the piece as I renamed the file to just "bgm1.ogg". I needed to either find royalty-free music that fit the mood of the game, or write a piece myself. I took the latter approach.

Anyway, after a couple of weeks of tidying code, fixing bugs, composing music and redrawing some graphics, I have released version 1.2 of the game! 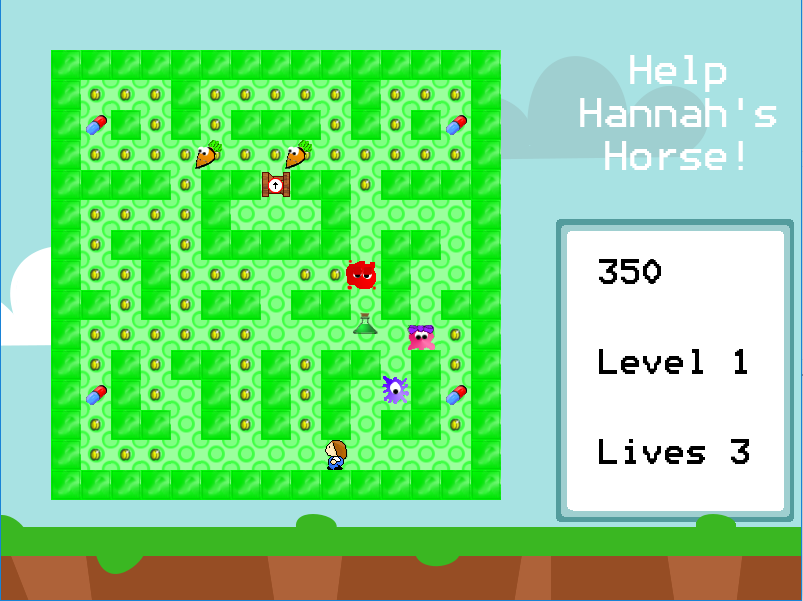 Here's Hannah merrily running around level 1 collecting the gold coins and moving carrots and avoiding the ghosts. The green potion makes Hannah invulnerable for a short time if she collects it.

It's available on my Sourceforge page (http://hannah.sourceforge.net) for Windows and in source code form for other platforms, if you're so inclined. There's a Makefile for Linux included.