The Architects
Fags, Mags and Bags
On Hiatus
When the Dog Dies
Welcome!

Teenage Mutant Ninja Consonants
To Be or Not to Be?
An Article About Gender
Journey into Welsh
Search Posts
Links
Privacy Policy My Radio Comedy Blog Duolingo Say Something In Welsh Online Welsh Dictionary Help Hannah's Horse!
Donate! Buy me a coffee!

If you play and enjoy Help Hannah's Horse or like this site and you'd like to say thanks, please consider buying me a coffee on:

Fags, Mags and Bags is set in a small newsagent and confectioner's in the Lenzie area of Glasgow. It follows Ramesh Mahju (Sanjeev Kohli), his best friend and soulmate Dave (Donald McLeary), and Ramesh's two sons, Alok and Sanjay. The series is written by Kohli and McLeary. It is both amazing and great. 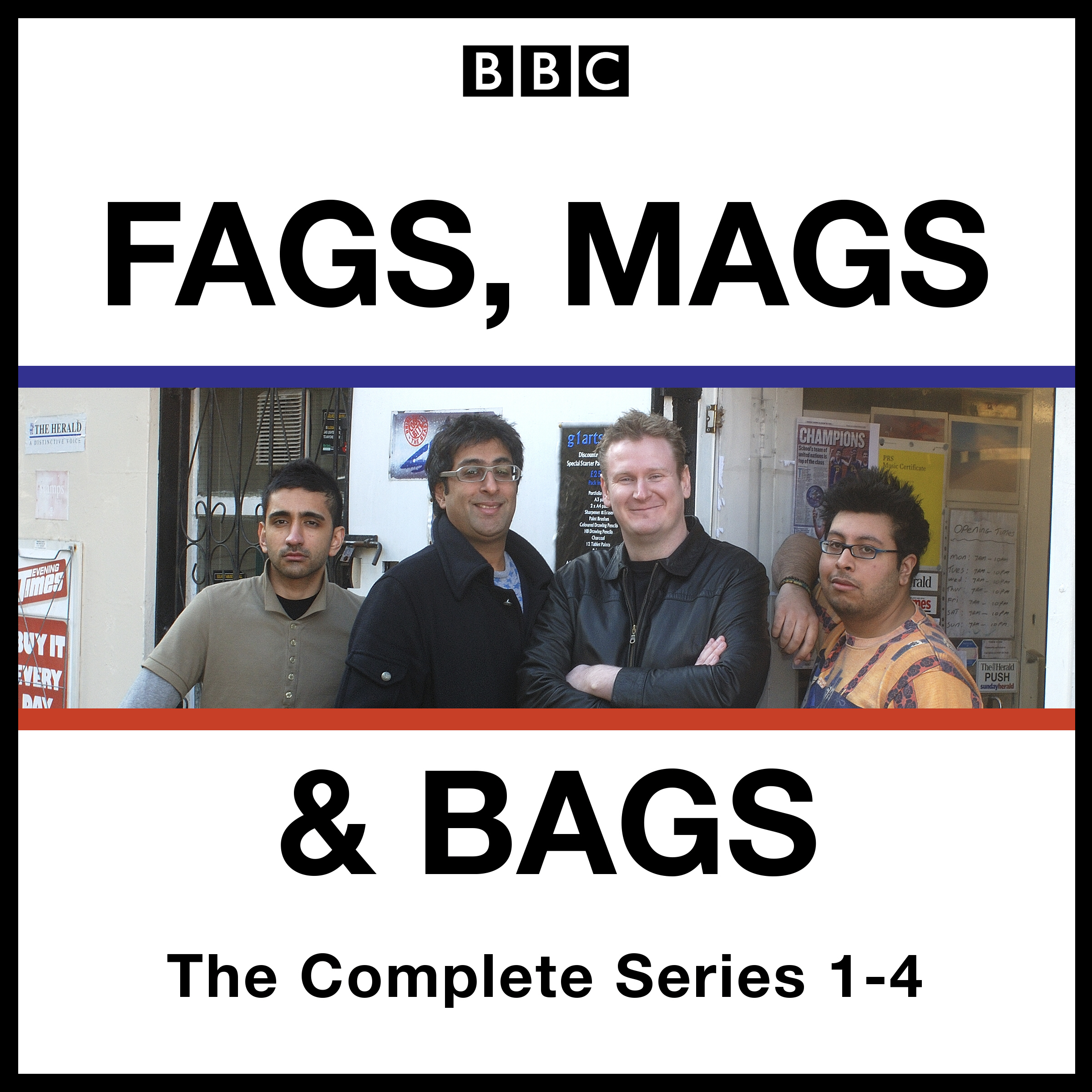 Ramesh's newsagent is a microcosm of life frequented by all the locals of Lenzie, from the indiscreet, gossipy priest Father Henderson to single mother Keenan's Mum and everyone else from the community in between. And it is a community.

Ramesh is a widower, although not much mention is made of his late wife. We do, in one episode, meet his evil Mother-in-Law, played brilliantly by Nina Wadia.

Ramesh has two sons, teenager Sanjay and twenty-something Alok, both of whom Ramesh describes as being surly arses. Sanjay is a typical teen with catchphrases that include "OMG", "Get over yourself" and "'SAKE!". Alok sees himself as a forward-thinking entrepeneur, always looking for the next big thing and desperate to drag his father's shop into the 21st century, usually with little success.

Dave is Ramesh's best friend and only employee at Fags, Mags and Bags. They share the same, deep love of everything shop, from laying out the famous "Wall of Crisps" in the most effective way, to the best place to display greetings cards, and understanding the reassurance customers find in keeping the same Super Soaker on display for decades. Dave is also a widower, and enjoys a brief relationship with a pet psychologist called Kate in series two and with a man named Lesley in series six and seven. In series two he starts to try to popularise the exclamation "Five Alive!" with some limited success.

The other main characters, who pop up from time to time are Father Henderson, the local priest who reveals far too much of what goes on in the confessional and who has a subscription to a Doctor Who magazine; Keenan's Mum, who is unnamed besides her relationship to Keenan, a local child with a good heart but a penchant for petty theft; Bra Jeff, the owner of "Bras Etc", the local lingerie shop, who ends many of his sentences with a needless "et cetera"; Mutton Jeff, the butcher; Mrs Gibb, a cheerful Geordie who comes in to buy her Grazie magazine; and Lovely Ted, an older gentleman with a tedious and predictable sense of humour that Ramesh and Dave enjoy, none the less.

Fags, Mags and Bags is a series I first came across about five years ago, and I didn't think much of it. The lack of canned laughter left me with a funny feeling about it, as if I wasn't quite sure what it was trying to be. On recent relistenings, though, it's precisely the lack of a laugh track that I like. It just lets the comedy flow. And flow it does. There are some genuinely laugh-out-loud moments (Ramesh designating each of his sons a call sign in the first series episode "Build the Titanic" comes to mind) and a lot of more gentle laughs, and the programme has a genuine warmth that keeps me listening. There really aren't any unlikable characters, everyone is played quite sympathetically, and no one, despite their flaws, is the butt of any unkind jokes. You get a real sense of friendship between Ramesh and Dave as they talk about all things shop and share their love of the music of Barbara Dickson. If you've ever seen Open All Hours with Ronnie Barker and David Jason, Kohli's Ramesh is virtually the polar opposite of Barker's Arkwright. Where Arkwright is cynical, selfish and greedy, Ramesh is caring, considerate and has his customers' best interests at heart, even if it's sometimes to his own disadvantage.

Overall, Fags, Mags and Bags is an enjoyable programme that I will probably find myself listening to all over again when I finish it the first time. It's full of warmth, humour and intelligence and characters that you genuinely end up caring about.

I've progressed from series 3, when I wrote this originally, to series 8, and Fags, Mags and Bags is just growing on me all the time. I love the little recurring gags, like the cries of "NOOOOO" when someone says something inappropriate, the "...over 29 years", "Do you mean 30 years?" joke, and the references back to earlier storylines that sometimes occur. I thought the series 6 (I think) reference back to the Lembit Opik Pita Heater was particularly good.

It also seems that Sanjay is *not* a teenager after all, as there is talk of him wasting the last 10 years pretending to enrol on different college courses. It seems he's probably around 25 with Alok a little older.